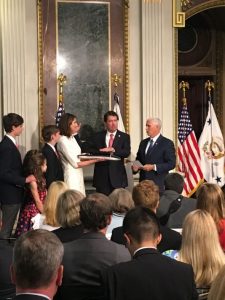 The Tennessean published on Wednesday an op-ed by Ichiro Fujisaki, the president of America-Japan Society and Japan’s ambassador to the U.S. from 2008 to 2012. Fujisaki wrote in part: “The ties between Tennessee and Japan run deep. Three U.S. ambassadors to Japan have hailed from the Volunteer State: the current ambassador, William Hagerty IV, Howard Baker Jr., who served from 2001 to 2005, and Luke Wright, who served from 1906 to 1907…. Tennessee and Japan have a true friendship, and it is that friendship that brought me to the state twice as ambassador of Japan to the United States…. Those U.S. ambassadors…knew the importance of strengthening the bonds between the United States and Japan. They understood that the U.S.-Japan alliance remains the cornerstone of economic and political security in the Asia-Pacific region…. Without a doubt, the United States and Japan share a unique bond based on common values, and the connection between Tennessee and Japan is truly special….I know that together, the U.S.-Japan alliance will continue to thrive on its shared values, promoting peace, friendship and prosperity that will continue to benefit Tennessee.”