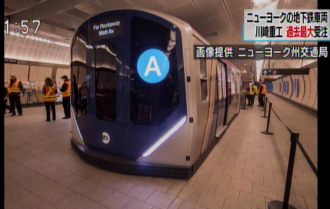 NHK reported this afternoon that Kawasaki Heavy Industries announced on Thursday that its U.S. subsidiary has received an order worth 400 billion yen to build up to 1,612 cars for the New York subway. The network said this is the biggest order the company has every received. Kawasaki is planning to deliver the new cars starting in 2020. According to the network, Kawasaki has already delivered 2,200 cars to the Metropolitan Transportation Authority in New York, adding that about 30% of the subway cars in the city are already made by Kawasaki. The network reported that Hitachi Ltd. has also reportedly received consecutive orders to build high-speed rail cars in the UK, saying that Japanese makers are expanding their railway business overseas, where the market is expected to grow.