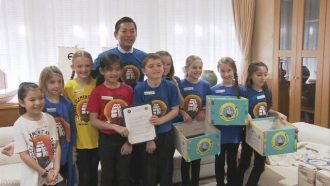 NHK reported on its website that a teacher and 14 pupils at an elementary school located on Camp Kinser, Okinawa, are planning to make 1,000 origami cranes, or “senbazuru,” in cooperation with local Japanese schools and deliver them to Maeda Kochi, a site of intense fighting during the Battle of Okinawa 73 years ago. The network said the pupils met with Urasoe Mayor Matsumoto today and asked him to place boxes to collect origami cranes at local schools in Urasoe. Ayano Shimojo, who teaches Japanese at the school, was quoted as saying: “By folding the origami cranes, I hope the children will be able to visit the battlefield, learn about its history, and pass this knowledge on to others.”

The network added that Kinser Elementary School has been promoting peace education through such activities as having pupils deliver origami cranes to  Chibichiri-gama Cave where many Okinawans were forced to commit mass suicide during the war, following an incident last September in which the cave was vandalized by minors.