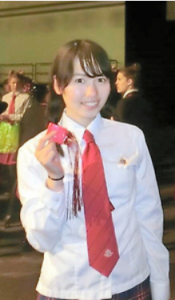 When Ezure participated in a Model United Nations scene, she had difficulty bringing together dozens of her team members. When a girl takes the leadership, boys would fall away. Although boys’ proposal had many unique perspectives, the team was divided between boys and girls. “So I was fretting over it,” she said.

Ezure came to a turning point last summer when she was in New Zealand, where she studied for three months.

“Is there anyone who knows an LGBT person around you?” A woman teaching social studies asked her students during a high school homeroom hour. Many of the students there raised their hands. “So is my uncle,” said one of them. “So is someone I know,” said another.

While listening to their conversation, Ezure felt: “In Japan, a teacher takes the lead and students are often passive. But in New Zealand, a teacher brings out each student’s individuality and the whole class is positive to accept it.”

In that instant, Ezure realized that it is important to bring out and accept others’ feelings.

After returning to Japan, Ezure participated in the GUP. She was thinking back on herself when conversing with other participants in a group discussion. She then realized that “what’s lacking in me was kindheartedness for others.” She also became aware that her experience in New Zealand would be a step forward to an image of the future she envisions.

“I learned a lot from my study abroad, so I’d like to share my experience with others,” said Ezure. She made a newspaper with a write-up on her life in New Zealand and distributed it to all students in her school and put it up on a bulletin board. Now she is planning to hold a panel discussion in the third term for students who have studied abroad and those who participated in the GUP.

Her future dream is to become a diplomat. She is also interested in gender education, saying: “We are the generation who, ever since we can remember, have seen and heard about the gender issue and women’s empowerment on TV and the internet and have been reminded of these issues. Someone who is aware of these issues must take the lead.” Her participation in the GUP made her feel that way even stronger.