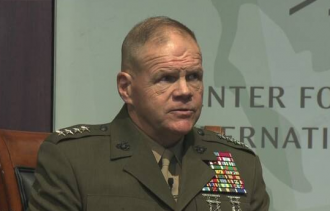 NHK reported this morning that Gen. Robert Neller, the Marine Corps Commandant, said the helicopter landings that occurred in Okinawa this month were precautionary measures. [The broadcaster called them “emergency landings.”] The general was quoted as saying during a speech in Washington on Thursday: “Quite frankly, I am glad that they were precautionary landings, because nobody got hurt and we didn’t lose any airplane.” He also reportedly said the Marines are looking to increase flight training hours for pilots to improve their skills. The network also reported that the U.S. Joint Staff Director, Lt. Gen. Kenneth McKenzie, told reporters that the landings are made out of an abundance of caution and stressed the need to continue training. He was quoted as saying: “We have to be able to continue to train if we’re going to be able to support our Japanese allies.” Commercial networks carried similar stories.