Japan, China agree to seek reciprocal visits by their leaders 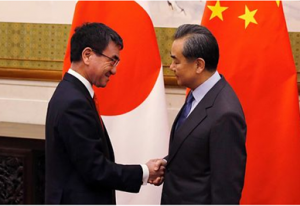 All national papers on Monday reported extensively on yesterday’s foreign ministerial meeting between Japan and China held in Beijing, during which Foreign Minister Kono and his counterpart Wang agreed to make arrangements for Prime Minister Abe and President Xi to visit each other’s capitals. In the first trip to China in 21 months by Japanese foreign minister, Kono called for “full-scale improvement” in bilateral ties. In response, Wang said the “improvement and development of bilateral relations will serve the interests of both nations.”

The two ministers exchanged views on the situation in North Korea, China’s maritime advancement in the East China Sea, and China’s “One Belt, One Road” trade promotion initiative. Although they agreed to make additional efforts to launch the agreed-upon bilateral defense communication mechanism to avoid inadvertent clashes between their militaries in the East China Sea, Wang dismissed Kono’s request for China to take measures to prevent a recurrence of the recent incident in which a submerged Chinese submarine was operating near the Senkakus.

Kono later met with Premier Li and asked him to visit Japan this year to attend a proposed trilateral summit with South Korea. The Chinese official promised to give positive consideration to the invitation. The Japanese minister told the press afterward that he sensed that Beijing has a strong desire to improve Sino-Japanese relations.

Yomiuri wrote that Tokyo and Beijing are both very interested in jumpstarting bilateral relations, opining that the Abe administration needs China’s cooperation to defuse the tension on the Korean Peninsula and to boost business prospects for Japanese companies by capitalizing on President Xi’s Belt and Road initiative. According to the daily, the Xi administration’s attachment of importance to Tokyo was evidenced by the fact that Premier Li met with Kono on Sunday since the Chinese leader rarely receives courtesy calls from foreign officials on the weekend. Asahi said relations between Tokyo and Beijing finally appear to be thawing, although deep differences still remain with regard to the Senkakus.  Mainichi wrote that Beijing elected to improve ties with Japan following the Abe administration’s decision to support President Xi’s Belt and Road initiative. Sankei projected that improvement in Tokyo-Beijing relations will eventually reach its limit on account of the deep schisms over the Senkakus and historical perceptions.