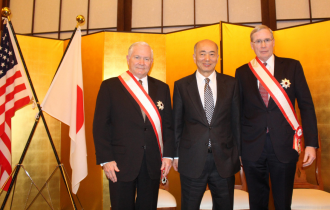 Kyodo News reported that Japan has recognized former Defense Secretary Robert Gates and former National Security Adviser Stephen Hadley for their contributions to strengthening the bilateral alliance. In a decoration ceremony held in Washington on Thursday, Japanese Ambassador to the U.S. Sasae presented the Grand Cordon of the Order of the Rising Sun to both Gates, 74, and Hadley, 70. Kyodo wrote that a message from Prime Minister Abe was read by an embassy official at the ceremony, saying that Japan remembers the assistance and disaster relief known as Operation Tomodachi that was provided under Gates’ leadership in the wake of the devastating earthquake and tsunami that hit northeastern Japan in March 2011. “The people of Japan will never forget the dedication and support (shown) by the U.S. military under the leadership of Secretary Gates,” said Abe in the message. Abe also hailed Gates’ initiatives in pushing forward the realignment of the U.S. forces in Japan.