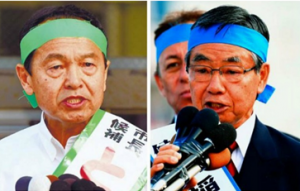 All national papers on Monday took up the official kickoff of the campaign for the Nago mayoral race in Okinawa on Sunday, noting that anti-base mayor Inamine will go head to head with former municipal assembly member Toguchi, who was fielded by the LDP with the goal of unseating the incumbent. Okinawa Governor Onaga is campaigning hard to ensure the reelection of Inamine in the belief that his victory is critical to derailing the ongoing FRF landfill operation off Camp Schwab. As the Komeito party is backing Toguchi’s bid, the election appears to be a “proxy war” between Onaga and the Abe administration. The dailies projected that the outcome will have a large impact on the defiant governor’s bid to seek reelection in the fall and block the progress of the FRF construction.