In the Nikkei regular public opinion poll conducted on Dec. 15–17, 2017, the Liberal Democratic Party support rate among women was 37%, 6 percentage points lower than the 43% party support rate among men. Why is the LDP support rate lower among women? No further analysis can be done using the data from a regular poll because the polling sample is small. The support rate by gender can be further analyzed, though, if we use the data collected from the about 70,000 voters in the public opinion poll the Nikkei conducted to probe the public’s views around the time of the October 2017 Lower House election.

The data was analyzed after dividing it by gender and further categorizing it by age group. The overall LDP support rate among men is 43%, and the rate tends to be high among the younger age groups and low among the higher age groups. Although 55% of men age 18 and 19 and 54% of men in their 20s support the LDP, only 40% of those in their 60s and 43% of those aged 70 or over support the party.

In fact, many Diet members have trouble connecting with young women. LDP Lower House member Karen Makishima invites women to bring their children to her speeches so that she can reach them and tell them about her policies. “I would like women and the young generation to take interest in the policy-creation process by participating in the election,” she explains.

The Abe administration has designated the creation of an environment where women can balance work and childrearing as a policy aim, but the cabinet has a low support rate among “working women.” Dividing the data for respondents with the self-avowed profession of “salaried workers and civil servants” by gender, the LDP support rate among women was 33%, 10 points lower than the men’s rate of 43%. This suggests a gender disparity among company workers benefitting from wage increases and improvements in work environment.

Kaori Sasaki, CEO of ewoman, Inc. (Minato Ward, Tokyo), which supports company’s diversity management efforts, says, “Women start raising children in their 20s and 30s, and for the first time they encounter the shortage of daycare spots and other issues related to policies. [The poll figures] may reflect their frustration with politics.” It looks like behind it is the failure to resolve policy issues women are very interested in, such as the lack of daycare spots.

The gender wage gap in Japan is said to be larger than that in European countries. Sasaki says, “The gender gap remains. For example, the more childcare leave a woman takes, the lower her wages are compared with her peers who joined the company at the same time. Women have less of a tangible sense than men do of the benefits of the economic recovery.” 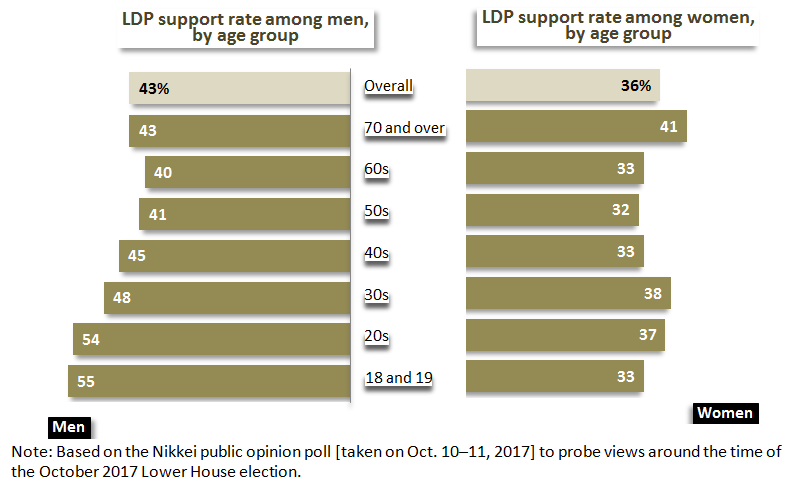