In the telephone-based public opinion poll jointly conducted by Nikkei Inc. and TV Tokyo on Jan. 26–28, the cabinet support rate was 55%, up 5 percentage points from the previous poll taken in mid-December last year. The government will submit to the ordinary Diet session a bill on work-style reforms, and the bill will include the introduction of the “highly skilled professionals” system, under which wages will be based not on hours worked but on results achieved. Respondents were split on implementing the system with 42% in favor and 39% opposed.

The cabinet support rate rose 3 points among men to 59% and 6 points among women to 49%. Independents’ backing of Abe increased by 4 points to 30%.

The cabinet support rate plummeted to 39% in the poll taken right after the Tokyo Metropolitan Assembly election in July 2017. In the recent poll, backing returned to a level near the 56% recorded in May 2017. The Nikkei Stock Average has also returned to the 24,000 range for the first time in about 26 years. Abe is backing wage hikes, and some say that high hopes for the cabinet are pushing up the support rate.

Respondents were split on the government plan to limit monthly overtime at particularly busy times of year to “less than 100 hours [per month],” with some 41% of respondents saying that the cap is “appropriate” and 39% saying “the cap should be set lower.” Some 7% said “the cap should be set higher.” This plan is also part of the bill on work-style reforms.

The government is considering a framework that would offer people the option of postponing the starting age for receiving public pension benefits to over 70. People who take the option would see their monthly benefits increase from the originally entitled amounts. Those opposed to the system exceeded those in favor 53% to 31%.

The survey was conducted on Jan. 26–28 by Nikkei Research Inc. via random-digit dialing (RDD) to both landlines and mobile phones. It drew 969 responses from men and women aged 18 and older nationwide, for a response rate of 45.5%. 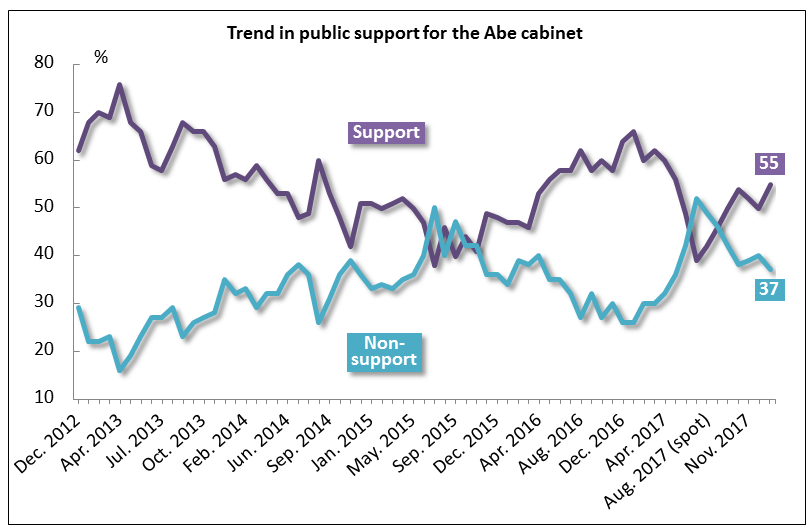