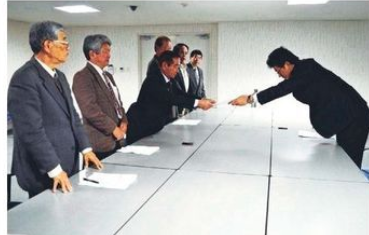 On Jan. 29, [members of] the Nago City Assembly (chair: Minoru Yabiku) visited the U.S. Consulate General in Naha and the Ministry of Foreign Affairs Okinawa Liaison Office and delivered a protest resolution and written statement on the repeated cases of unscheduled landings by U.S. military aircraft. According to the assembly members and others, Consul Hilary Dauer, who handled the visit to the U.S. Consulate, apologized for the frequent unscheduled landings, saying, “I’m sorry.” But in regard to the implementation of the Status of Forces Agreements in Italy and Germany based on the wishes of the local residents, he reportedly said he “didn’t know” [about the matter]. Regarding the flight of U.S. military aircraft over Futenma Daini Elementary School, Dauer reportedly said, “That is something done by the military and not something I can comment on directly.”

MOFA Okinawa Liaison Office Deputy Chief Yoshiyasu Iseki showed understanding for [local residents’ reaction to] the repeated unscheduled landings, saying, “It is natural that local residents are concerned and have growing distrust.” However, he did not respond to the concrete requests, such as halting flights and abandoning the construction of a new base.