Young Japanese heading to South Korea in quest of stardom 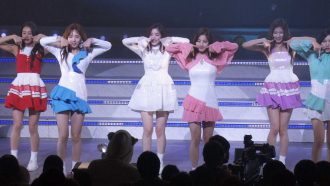 NHK’s “Close-up Gendai+” reported that a growing number of young Japanese are heading to South Korea with the aim of becoming pop stars. The program said many internationally popular “idol groups,” such as TWICE and BTS, are based in South Korea and include members from Japan, Taiwan, and other countries. South Korea-based groups are reportedly very popular around the world today because of their effective use of YouTube and Twitter and high-level performances. The program said many young people attending dance schools in Japan now dream of making their debuts in South Korea.