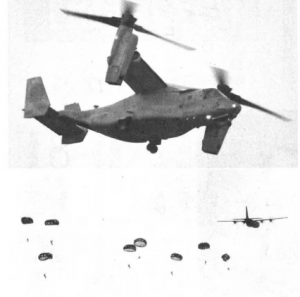 Since January the U.S. Marine Corps has been intensifying its exercises at the U.S. military’s Yokota Air Base (Tokyo) and the Ground Self-Defense Force’s Higashifuji training field (Shizuoka Prefecture). On Jan. 11, MV-22 Ospreys arrived at the Yokota base from Marine Corps Air Station Futenma (Okinawa Prefecture) to conduct takeoff and landing training at Higashifuji. Beginning on Jan. 19, 50 soldiers of a reconnaissance unit conducted parachuting training at Yokota. The intensification of training is apparently in preparation for deployments to the Indo-Asia and Pacific regions.

The number of takeoffs and landings by Ospreys, which flew from Okinawa between Jan. 11 and 21, reached 50 times, as visually confirmed by Defense Ministry officials.

Two squadrons, Marine Medium Tiltrotor Squadrons 262 and 265 (VMM-262 and VMM 265), are deployed to the Futenma airfield. Each comprises 12 Ospreys, for a total of 24. The two squadrons alternately deploy to an assault landing ship as part of the 31st Marine Expeditionary Unit (MEU). The ship is deployed to the U.S. Navy’s Sasebo base (Nagasaki Prefecture). The rotations are a year long, from June to the following May.

VMM-265 was placed under the command of the 31st MEU from last June. The squadron will soon participate in “Cobra Gold 2018,” a multinational exercise beginning Feb. 19 in Thailand, and other maneuvers, which will last until May. (Abridged)