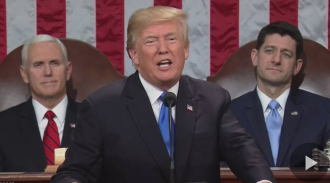 ll networks reported at noon on President Trump’s first State of the Union address on Tuesday, during which he emphasized a “safe, strong, and proud America.” NHK quoted the President as also saying: “This, in fact, is our new American moment. There has never been a better time to start living the American dream.” The network said the President emphasized the major tax reform as one of the achievements of his first year in office and promised to realize fair trade, conjecturing that he had such nations as China in mind and quoting him as saying: “America has also finally turned the page on decades of unfair trade deals that sacrificed our prosperity and chipped away our companies, our jobs, and our wealth.” The network said the President also called for cooperation from both the Republicans and the Democrats in realizing major infrastructure investment. The network added that the President also emphasized successful measures against ISIL and expressed his intention to maximize pressure on North Korea. An NHK reporter commented that the President highlighted his administration’s achievements and promised to deliver on his campaign pledges in view of the midterm election in November that will deliver a verdict on his administration. Kyodo highlighted that the President mentioned Toyota’s announcement of a new plant to be built in Alabama.