Number of female presidents in Tokyo rises to 95,176 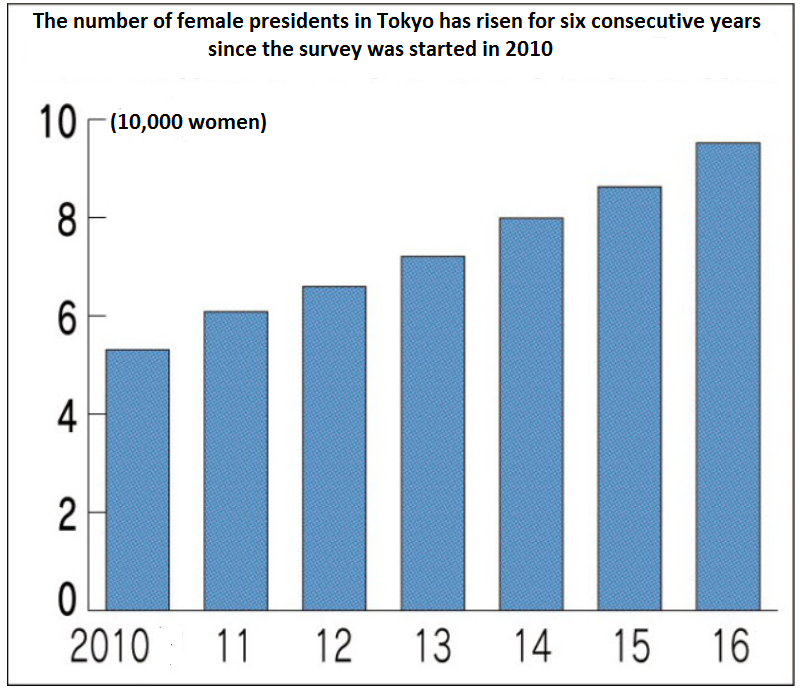 According to a survey of female company presidents in Tokyo compiled by Tokyo Shoko Research, Ltd. (TSR), the number of female presidents in the capital rose by 10.3% over 2015 to reach 95,176 in 2016. The number of female presidents has increased every year since the survey was launched in 2010 and set a new high this year as well. More than 40% of the female presidents worked in the services industry, a field where it is easy to launch a company with little capital. The rise was reportedly bolstered by the government’s policies to empower women and “an increase in cases in which a woman who wants to take over a small or medium-sized company is made president,” according to TSR.

Women made up 14.8% of all company presidents in Tokyo. Only Okinawa Prefecture (20.6%) and Fukuoka Prefecture (15.2%) outpaced Tokyo in terms of the percentage of female presidents.

By industry, women made up 45.2% of all presidents of service companies, with 43,016 women heading such companies. According to TSR, “there are many women presidents in the service industry because restaurants, beauty parlors, and the like can be set up with little capital and it is a field that requires attentiveness.”