Pence at Winter Games in Korea — sign of hope or a warning? 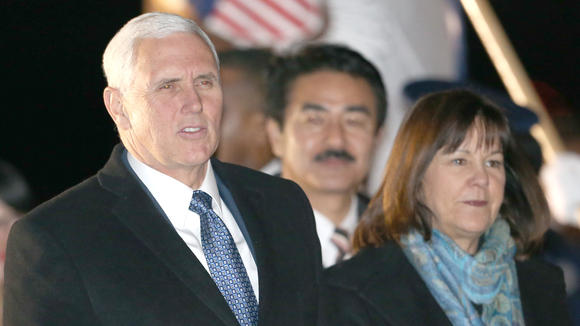 U.S. Vice President Mike Pence and his wife arrive in Japan at Yokota Air Base Tuesday. (Photo by Rie Ishii)

With U.S. Vice President Mike Pence stopping by Japan on his way to the Winter Olympics in South Korea, an opportunity has been created for the three countries to present a united front against North Korea, but some read a deeper meaning into his attendance at the games.

U.S. President Donald Trump and Japanese Prime Minister Shinzo Abe spoke on Friday about how Pence’s visit was a chance to reaffirm the strength of the U.S.-Japanese alliance. Although Abe will depart for South Korea on Friday, a day after Pence, Tokyo originally considered staging some political theater by having the two board the same plane or land at a similar time.

Pence arrived in Japan on Tuesday ahead of talks with Abe the next day. His visit here is largely seen as aimed at demonstrating the two countries’ resolve against North Korea’s nuclear and missile development. Some also believe the trip is intended to put some pressure on South Korean President Moon Jae-in, who has expressed a desire to open a dialogue with Pyongyang, to stay the course on efforts to rein in the rogue nation.

The announcement on Jan. 10 that Pence would visit the Pyeongchang Games was a surprise to Japan. As of the end of December, Tokyo was planning to send a cabinet member rather than the prime minister to the games because it did not see the U.S. sending a high-level official. But once Pence’s plans were revealed, Abe decided to go as well.

“I sense that the purpose of Pence’s trip is more than just a check on North Korea,” said one senior Japanese official.

The Trump administration has said that all options are on the table when it comes to North Korea, including military action. Some say that if the U.S. begins preparing to evacuate soldiers’ families and nonessential personnel from South Korea, that should be taken as a sign that the country will attack North Korea.

Before heading to Japan, Pence stopped at a U.S. military base in Alaska where he inspected missile defense systems. Being the closest military outpost on U.S. soil to South Korea, the base would likely serve as an important evacuation point for families of soldiers stationed in South Korea, after U.S. military bases in Japan. When arriving in Japan, Pence landed at the U.S. air base in Yokota, another important location in the event of a crisis on the Korean Peninsula.

At a U.S. military base in a Seoul suburb last November, military leaders from the U.S., U.K., Japan and elsewhere discussed each country’s evacuation plan in the case of a military conflict on the peninsula, according to people in attendance. Japanese officials, however, deny that the meeting took place.

After visiting Japan in November, Gen. Vincent Brooks, commander of U.S. forces in South Korea, quietly made another trip to Japan at the end of January to talk with Japanese officials such as Shotaro Yachi, head of the National Security Council, and Takeo Akiba, vice minister for foreign affairs. The details of these discussions have not been revealed.

Dialogue is expected to prevail during the Olympics as Washington and Seoul have agreed not to hold joint military drills opposed by North Korea until after the games. But backlash from Pyongyang will be inevitable once the exercises resume.

Both the U.S. and North Korea continue to play a game of chicken, with each using the threat of military conflict. But a crisis on the peninsula would likely leave many victims, including U.S. soldiers and the more than 200,000 American citizens in South Korea. Pence’s trip can be seen as part of Washington’s strategy to draw concessions from Pyongyang by showing its serious commitment in the region.