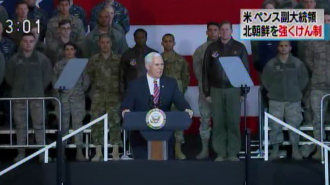 NHK reported at 3 p.m. that Vice President Pence delivered a speech to U.S. service members and SDF members at Yokota AB today, during which he sent a strong warning to North Korea by saying that it should not underestimate the capabilities of the U.S. military. The network quoted the Vice President as saying: “We will continue to intensify this maximum pressure campaign on North Korea until it abandons its nuclear and ballistic missile programs once and for all. But until that day arrives, let the world know, we are ready for any eventuality.” The network said the Vice President also expressed the U.S. commitment to closely work with Japan to defend against the North Korean threat. He was also quoted as saying: “Those who dare threaten us would do well not to underestimate the capabilities of the armed forces of the United States. We will defeat any attack, and meet any use of conventional or nuclear weapons with a response that is rapid, overwhelming, and effective.”