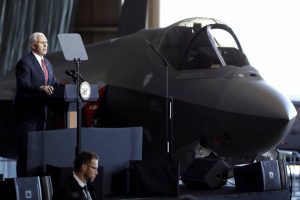 Asahi reported on Vice President Pence’s speech at Yokota Air Base on Thursday. The paper wrote that the Vice President sent a warning to North Korea by saying that the United States is ready to defend its homeland and its allies anytime and anywhere, and that those who dare to threaten it should not underestimate the capabilities of the U.S. Armed Forces. The paper also wrote that the Vice President reiterated the United States’ policy of continuing to put maximum pressure on North Korea until it abandons its nuclear and ballistic missile programs.