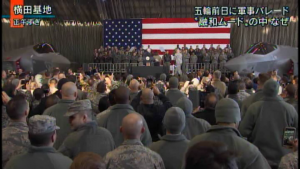 TV-Asahi “Hodo Station” reported on Vice President Pence’s trip to East Asia, speculating that its primary purpose appeared to be to prevent South Korea from being taken in by North Korea’s “charm offensive.” The program aired a number of strongly-worded messages that he conveyed in Alaska and Japan to signify Washington’s determination to maintain a hard line toward the defiant regime. The network quoted the Vice President as saying that the U.S. will not allow North Korea to “hijack” the PyeongChang Olympics, “vigilance and resolve will be our lodestar,” and the U.S. will defeat any attack involving conventional or nuclear weapons with a response that is “rapid, overwhelming, and effective.”

Claiming that South Korean President Moon has responded rather negatively to the idea of arranging a press photo opportunity at his proposed trilateral meeting with Vice President Pence and Prime Minister Abe on the sidelines of the Olympics opening ceremony, the regular commentator, former Kyodo News managing editor Goto, said the GOJ is bracing for the possibility of Seoul being taken in by the Kim regime’s peace overtures and asking the Trump administration to postpone bilateral military exercises again.