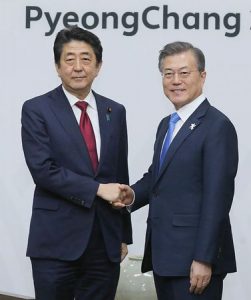 All national dailies reported on Saturday on Prime Minister Abe’s meeting with South Korean President Moon on the sidelines of the opening ceremony for the PyeongChang Olympics on Friday. Although Abe strongly urged Moon to implement the 2015 agreement on comfort women, the ROK leader reportedly stated that the issue will not be resolved through government-to-government talks. However, according to Yomiuri and Sankei, the ROK president told Abe that his nation will not seek renegotiation of the accord, return Japan’s 1 billion-yen contribution to the comfort women foundation, or dissolve the foundation. Mainichi, Yomiuri, Nikkei, and Sankei wrote that the two leaders confirmed the policy of applying maximum pressure on North Korea. Asahi wrote that although PM Abe stressed the importance of trilateral unity with the United States in dealing with the DPRK, President Moon reportedly expressed hope that Japan will seek dialogue with Pyongyang in a proactive manner.