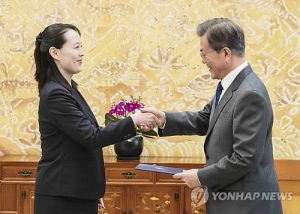 All national dailies on Sunday front-paged reports on South Korean President Moon’s meeting in Seoul on Saturday with North Korea’s high-ranking delegation to the PyeongChang Olympics, including Kim Jong Un’s sister Kim Yo Jong. The ROK government announced that during the meeting, President Moon received an invitation from Kim Jong Un to visit Pyongyang and said he will make efforts to realize the visit by creating the necessary conditions. According to Yomiuri, Kim Yo Jong did not respond to President Moon’s recommendation that the DPRK hold dialogue with the United States. Yomiuri and Mainichi wrote that the GOJ is alarmed by Pyongyang’s invitation based on the view that it is an attempt to drive a wedge into the trilateral coordination between the United States, Japan, and South Korea.