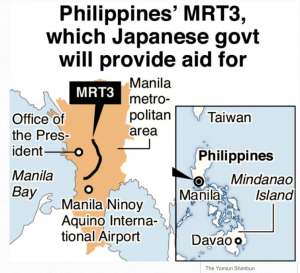 The government plans to provide yen loans worth about ¥30 billion for the purpose of rebuilding a trouble-prone metropolitan railway in the Philippines.

Under the plan, Japanese companies are expected to undertake all the related work on-site, such as vehicle repair, maintenance and management.

Demand for railway maintenance work has been on the rise in emerging and other countries. The Japanese government will make efforts to sell such services overseas as a new feature of its infrastructure exports.

The Japanese and Philippine governments were set to agree at the Joint Committee on Economic Cooperation and Infrastructure held in the Philippines on Monday to cooperate for the yen loans.

If the yen loans are realized, the Philippine government is expected to commission related work to Sumitomo Corp. and Mitsubishi Heavy Industries Ltd., which will repair old train cars, railway lanes and a signaling system, as well as conduct safety control.

The two governments are aiming to cooperate to rebuild the 17-kilometer-long MRT3 line, which was opened in its entirety in 2000 in the Manila metropolitan area.

Sumitomo and Mitsubishi Heavy Industries constructed it and undertook maintenance work in the past, but they withdrew from the maintenance in 2012.

A joint enterprise made up of South Korean public corporations and other entities undertook the maintenance work in 2016, but a series of breakdowns and derailments took place, as it used old train cars that had not been repaired.

According to local media, passengers were forced to get off the train an average of 39 times a month due to failures while the trains were running. The Philippine government canceled the contract with the joint enterprise in November last year and has urged the Japanese side to return.

It is rare for the Japanese government to provide official development assistance including yen loans to the reconstruction of a railway, instead of its construction. Maintenance work is said to be the strength of Japanese companies, with a senior Japanese Foreign Ministry official saying, “It’s easy to differentiate [Japanese companies] from Chinese and South Korean companies, which put priority on low costs.”

According to the Land, Infrastructure, Transport and Tourism Ministry, the global market for the railway industry is expected to grow by 2.6 percent annually from 2019 to 2021. By business category, demand for “operation and maintenance services” accounts for about 40 percent — the largest segment — of the total.

The government will actively utilize ODA for railway maintenance work from now on, hoping to increase orders through public and private efforts.Speech