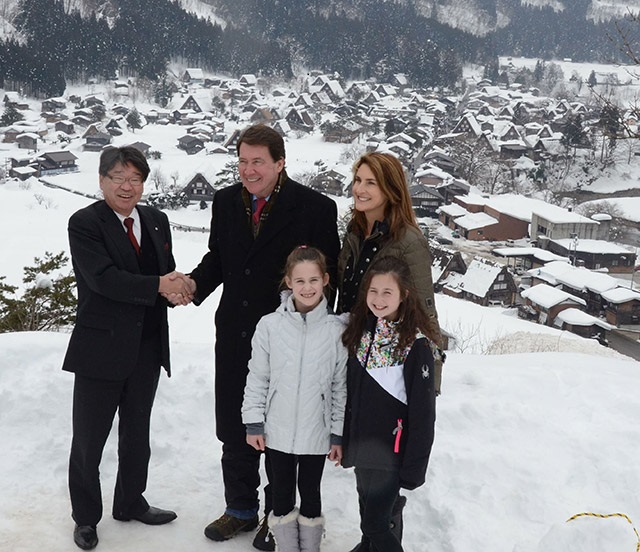 U.S. Ambassador William Hagerty and his family are given a guided tour of Shirakawa-go and its thatched-roof houses by Village Mayor Shigeru Narihara (left) (afternoon of Feb. 10, Ogimachi, Shirakawa Village, Ono County).

Hagerty, who took up his post in Japan last August, visited Shirakawa-go with his wife, Chrissy, and two of their four children, Tara and Christine. They traveled to the village at Chrissy’s suggestion.

They strolled through the village of Gassho-zukuri style houses, enjoying the scenic beauty of the village blanketed in snow. They went inside Wada House, which is an important cultural property of Japan. After lunch, they went up to the lookout point and enjoyed a panoramic view of the village in its blanket of snow. “Beautiful!” exclaimed Hagerty, saying also in Japanese, “Subarashii! [Spectacular!]” The family took some commemorative photographs.

Shirakawa Village Mayor Shigeru Narihara, who served as guide for the ambassador and his family, said with pleasure, “Their visit was short, but they were very moved. The Ambassador said he wants to visit again with his two sons.” Mr. Hagerty seemed surprised by the large number of Southeast Asian tourists. “He noted that there aren’t many American visitors and recommended that we do more to publicize Shirakawa-go in the United States.”