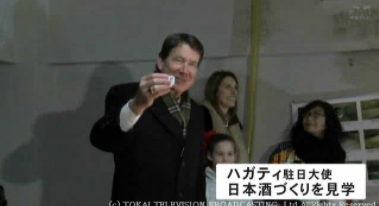 U.S. Ambassador to Japan William Hagerty toured a Japanese sake brewery with his family in Takayama City on Feb. 11 during his visit to Gifu Prefecture.

He visited a sake brewery which is located in Takayama Kami-ichinomachi and has been in operation since the Edo period (1603–1867). The president of the brewery gave an explanation of the sake-making process, showing the vats used for brewing sake.