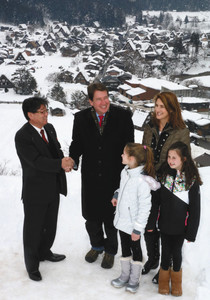 Ambassador Hagerty (second from left) and his family tour Shirakawa Village with guide Mayor Narihara (left) (at the lookout point from the Ogimachi Castle ruins in Ogimachi, Shirakawa Village).

U.S. Ambassador to Japan William Hagerty visited Ogimachi in Shirakawa Village with his family on Feb. 10 and toured its thatched-roof houses guided by Shirakawa Village Mayor Shigeru Narihara. The village has been designated a UNESCO World Heritage site. This was the Ambassador’s first official visit to Gifu Prefecture.

The Ambassador toured the area with his wife and two daughters from 10:00 a.m. to 2:00 p.m. They went inside Wada House, one of the largest thatched-roof houses in the village, and also watched residents remove snow from their steeply pitched roofs. The Hagertys lunched on soba noodles, Japanese char [fish], and tempura made of wild vegetables at Yamakoshi, a soba restaurant.

Before leaving the village, they stopped at the Ogimachi lookout point and enjoyed the panoramic view of the thatched-roof houses blanketed in snow. “Subarashi! [Spectacular!]” Mr. Hagerty exclaimed in Japanese, smiling to his family.

Mayor Narihara said, “The Ambassador pointed out that there are not many American tourists here and suggested we do more PR in the U.S. I would like to consider forming friendship ties with an American city.”