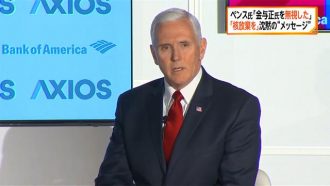 Fuji TV reported at noon that Vice President Pence disclosed during an interview with news site Axios held on Wednesday in Washington that he did not avoid Kim Yo Jong, the sister of the North Korean leader, at the opening ceremony for the winter Olympics but ignored her. The Vice President reportedly explained that he ignored her because it is not appropriate to give any consideration to North Korea and that he wanted his intentional disregard to send a message. The Vice President was quoted as saying: “North Korea must completely, verifiably, and permanently abandon its nuclear weapons program and ballistic missile program. When that commences, then and only then can we consider any change in posture by the United States.” While noting that the Vice President has made remarks that could be taken as being positive toward talks with North Korea, the network said he expressed the view that it would be difficult to hold substantive talks with North Korea at this time.