According to a Cabinet Office study, women’s wages drop by about 8.5% on average when they find a new job after resigning from a company when they get married or give birth. Wages generally tend to increase at the time of a job change because of the labor shortage, but women who change jobs [after these major life events] continue to face challenges.

A key reason behind the drop in wages for women is that today 50,000 more women are taking part-time positions when reentering the workforce [after marriage or childbirth] than a decade ago. Graphics showing Japan’s female labor force participation rate by age group have always traced the shape of an “M” as women in their 30s leave the labor force due to childbirth and childrearing and then reenter it. The Cabinet Office study reveals, though, that even if the dip in the M-shaped curve flattens out to make the M-shape into a trapezoid, it would not indicate a true resolution of women’s employment issues.

Using the Survey on Employment Trends as well as other data, the Cabinet Office looked into how women’s wages change in cases where a woman quits her job due to marriage or childbirth/childrearing. In 2004–06, the decrease in wages at the new workplace compared with those at the former place of employment was in the 1% range in cases where the woman resigned for reasons of “marriage or childbirth.” In 2014–16, however, wages were down by 8.5% when the reason for resignation was marriage and by slightly over 6% when the reason was childbirth/childrearing.

A major factor behind the drop in wages is the increase in the number of women who reentered the workforce as part-time workers. According to the Ministry of Health, Labor and Welfare (MHLW), slightly over 100,000 women found new work in 2006 after resigning from their former positions for reasons of childbirth/childrearing. In 2015, this figure increased by about 50% to approximately 160,000. Of these, 62% returned to the workforce in a part-time position, an increase of 16 percentage points. The number of women reentering the workforce in low-paying part-time positions increased by 50,000.

The MHLW has interesting data from a follow-up survey it conducted of families to whom a child was born in 2010. About 60% of all mothers were employed when they learned they were pregnant, but the employment rate dropped to 36% for women after they gave birth.  Although companies are setting up childcare leave and other systems, about 40% of employed women leave the workforce for a time to give birth.

Looking at the employment rate for women five years after giving birth reveals that the percentage employed has returned to about the level seen the year before giving birth, but half of the women are now in part-time positions.

Kanako Amano of the NLI Research Institute says, “It used to be that most of the women who reentered the workforce after giving birth had certain skills and so they secured solid wages, but wages tend to be very low for women reentering the workforce in general clerical positions.”

The market is good for those changing jobs in search of full-time positions. According to Recruit Career Co., 30% of those who changed jobs in the October–December 2017 quarter saw their wages increase by 10% or more from their previous position. According to Recruit Career’s Yuya Takada, “IT engineers and others with specialized skills tend to see their wages rise.”

In the Organization for Economic Cooperation and Development (OECD) survey on the frequency of IT usage at work, the score for Japanese women was 1.4 points, which is below the OECD average for women of 2.0 points and lower than that for American, English, German, and South Korean women. The gap between genders was largest in Japan. Information technology (IT) here refers to spreadsheet programs, programming languages, and the like.

To improve the compensation awarded to women seeking to reenter the workforce after childbirth or childrearing, “it is critical that women be aware that they receive wages as compensation for the skills they offer,” according to Amano.

Japan has traditionally had a more marked dip in women’s employment rate in the 30s and 40s age groups than other advanced nations. The dip is lessening gradually with the tight employment environment in recent years, and it looks like the dip may flatten out and change the traditional M-shaped curve into a trapezoid.

In the medium- to long-term economic and fiscal projections released by the Cabinet Office in January, the female labor force participation rate in the 25-to-44 age group was projected to increase from about 76% in fiscal 2016 to 88% in fiscal 2027 and the graph was estimated to shift from an M-shape to a trapezoid in fiscal 2022.

It is women who will determine whether the dip in the employment rate is resolved. If most of the women are in part-time positions, however, the change will not be powerful enough to set in motion the virtuous circle envisioned by the government, namely, more jobs, better wages, and more robust consumption. To fully bring out the latent power of women desiring to work, both workers and companies alike will need to take a hard look at the reality and make changes. 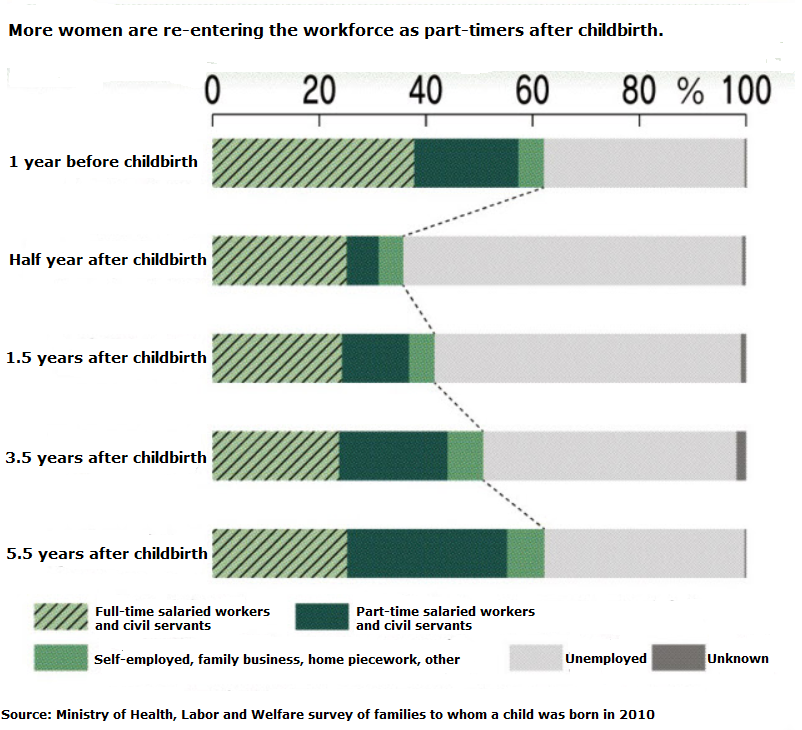