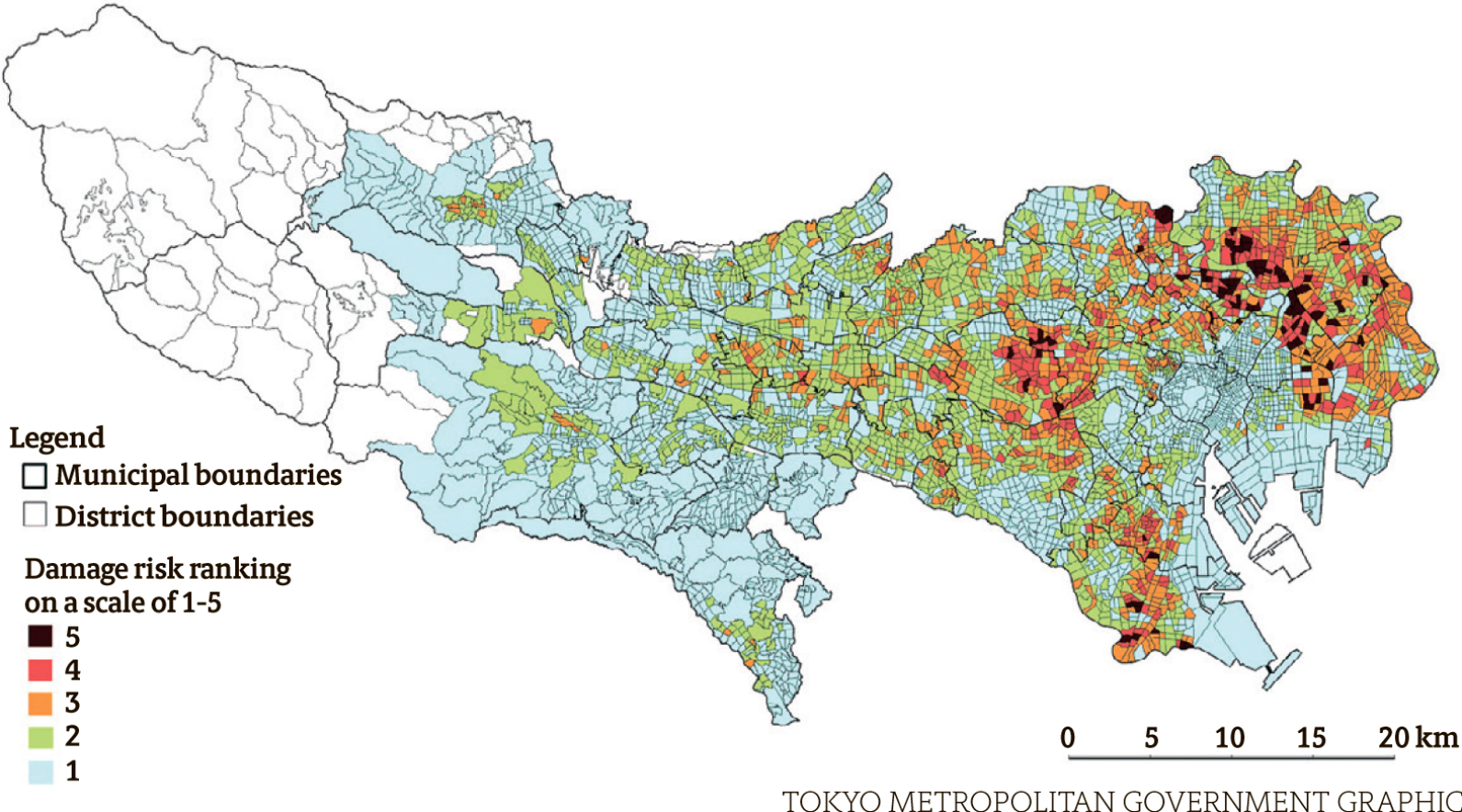 The seismic resistance of buildings and houses in Tokyo has improved in recent years, but some of the capital’s eastern areas remain particularly susceptible to building collapse and fire in the event of a massive quake according to a Tokyo Metropolitan Government report.

In its latest assessment, released this week, on Tokyo’s disaster risks, the metropolitan government said that communities stretching across southern Adachi and Arakawa wards, western Katsushika Ward, and northern parts of Sumida and Koto wards are at the highest risk. Old wooden houses and light-gauge steel buildings are concentrated in those areas.

According to the report, poor infrastructure in those regions — which are located mostly in alluvial and valley lowlands along Arakawa and Sumida rivers — would also hinder emergency responses if a megaquake hits and that the soft, soil-based ground would amplify the shaking, the report said.

Adachi, Sumida and Arakawa wards also topped the list of areas most susceptible to damage from fires, according to the report.

Yet Tokyo’s disaster risk assessment panel concluded that the overall risk of building collapse has diminished over the past five years by around 20 percent, and that the fire hazard risk has dropped by about 40 percent.

The metropolitan government examined 5,177 communities in Tokyo to check for vulnerabilities in the event of a potential earthquake. The assessment has been conducted roughly every five years since 1975.

The panel assessed risk on a scale from 1 to 5, analyzing factors such as the ground beneath the buildings, the space between them, and their age and structural type.

The fire threat was assessed by multiplying the risk of fire outbreak by the risk of it spreading.

Researchers at the central government-run Headquarters for Earthquake Research Promotion predict that the risk of Tokyo being hit by an earthquake of magnitude 7 or above within the next 30 years is as high as 70 percent.

In advance of the 2020 Tokyo Olympics and Paralympics, Gov. Yuriko Koike has prioritized upgrades to seismic measures in the capital. By 2019 Tokyo plans to raise the proportion of quake-proof structures to around 90 percent. The authority aims to ensure 100 percent quake-resilience by 2025.

The report said areas along the JR Chuo Line and Tokyo Metropolitan Road Route 318, also known as Kannana Dori, remain susceptible to fires due to a concentration of wooden residences.

The metropolitan government also noted that rescue efforts in areas with poorly established road networks and a high concentration of wooden buildings may be unsuccessful following a massive quake.

Given the condition of residential roads near the No. 7 loop road, residents of Nakano and Suginami wards, as well as a large portion of the city of Tama in western Tokyo, may face serious challenges in a disaster as help in those areas may not arrive on time, the report said.