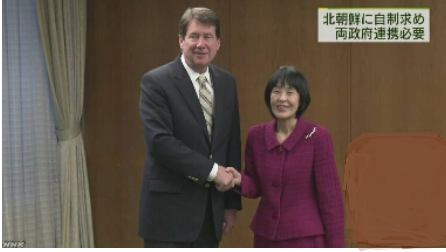 Hokkaido Governor Harumi Takahashi met for the first time with U.S. Ambassador to Japan William Hagerty. With reference to the North Korean missiles that passed over Hokkaido last year, they agreed on the need for the U.S. and Japanese governments to collaborate to have North Korea exercise self-restraint.

Ambassador Hagerty, who took up his post in Japan last year, visited the Hokkaido Prefectural Government Building on Feb. 15 and had his first-ever meeting with Governor Takahashi.

During the meeting, Governor Takahashi said with regard to the North Korean missiles that flew over Hokkaido last August and September: “Such actions cannot be allowed. I was indignant. I have requested the Japanese government ensure that such a thing never happens again, and I would like the United States to also collaborate [with the Japanese government] in handling North Korea.”

In response, Mr. Hagerty said, “North Korea poses a threat, and the United States will supply unwavering support to Japan.” The two parties agreed on the need for the U.S. and Japanese governments to collaborate to compel North Korea to exercise self-restraint.

At the meeting, Governor Takahashi also mentioned that Dr. William S. Clark, who was the first vice president of Sapporo Agricultural College which is the predecessor of Hokkaido University, was an American. She spoke of his accomplishments, saying “He encouraged the development of Hokkaido and its people, saying ‘Boys, be ambitious!’”