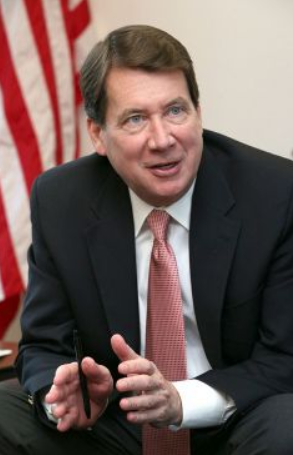 U.S. Ambassador to Japan William Hagerty gave an exclusive interview to Hokkaido Shimbun in Sapporo City on Feb. 16. Regarding the Japan-U.S. joint training in Hokkaido using the U.S. military transport aircraft known as the Osprey, the Ambassador made clear the U.S. intent to conduct training this year as last year, saying, “North Korea is raising tensions. U.S. forces and Self-Defense Forces will maintain preparedness by conducting joint training on an ongoing basis going forward.” Regarding the Northern Territories issue, he showed understanding for Japan-Russia dialogue on such topics as joint economic activities on the four islands, commenting, “The United States supports the efforts and initiatives of Japan and Russia toward a peace treaty.”

The first Osprey training in Hokkaido was conducted in early August last year. Mr. Hagerty said, “Safety is the first priority. The requests and concerns of local residents will be taken into consideration in drafting the training schedule.”

On the topic of the Northern Territories, the Ambassador said, “The United States supports Japan’s position. We recognize that Japan is insisting on its sovereignty [over the islands].” Regarding Japan-Russia negotiations, he said, “We welcome the leadership and commitment of the Japanese side.”

Asked how the United States will deal with North Korea, he said, “After the PyeongChang Olympic Games have ended, we will raise the pressure [on Pyongyang] further.” “The prerequisite condition for dialogue is visible action toward denuclearization,” he explained. With reference to North Korea’s launching of two ballistic missiles over Hokkaido, he said, “The United States will protect Japan using every means.”

Mr. Hagerty hinted at the possibility that the U.S. will return to the Trans-Pacific Partnership (TPP) trade pact, as mentioned by President Donald Trump. “The United States wants to try to deepen economic exchange with Japan whether by advancing frameworks like the TPP or by promoting bilateral negotiations,” the Ambassador said.

Mr. Hagerty served as Director of Presidential Appointments for the 2016 Trump Presidential Transition Team. He took up his post in Japan in August 2017. This was his first trip to Hokkaido. The interview was conducted at the U.S. Consulate General Sapporo.