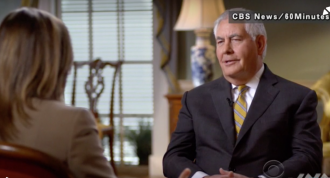 TBS reported on its website on Monday evening on Secretary of State Tillerson’s interview with CBS that was aired on Sunday, during which he stressed that the U.S. will continue the pressure campaign against North Korea. “We are not using a carrot to convince them to talk,” the Secretary was quoted as saying. “We are using large sticks, and that is what they need to understand. This pressure campaign is having its bite on North Korea, its revenue streams. It’s having a bite on its military programs.”

On the possibility of holding a dialogue with the DPRK, the network said the Secretary stressed the need to determine whether North Korea is ready, saying: “If they’re not, we’ll just keep the pressure campaign underway.” According to the network, while the Secretary said the dialogue would be a one-on-one discussion between the U.S. and North Korea at first, the Secretary pointed out that the U.S. has been “very clear with China” that “they are going to have an important role to play once we get to the negotiating table.” The Secretary also reportedly said: “My job is to never have a reason for the first bomb to drop. And we don’t know precisely how much time is left on the clock.” NTV and Fuji TV carried similar stories this morning. Fuji TV said that while inter-Korea relations have begun to thaw since the PyeongChang Olympics started, the Secretary demonstrated the U.S. stance of not entering direct dialogue with North Korea readily because the reclusive state’s stance remains unclear.