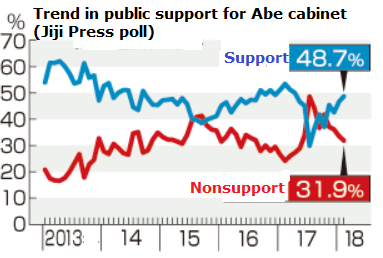 According to the February Jiji Press opinion poll conducted on Feb. 9–12, public support for the cabinet of Japanese Prime Minister Shinzo Abe rose 2.1 percentage points from January to reach 48.7% this month, while the nonsupport rate declined 1.7 points to 31.9%. The results are believed to reflect mainly Abe’s attendance at the opening ceremony for the PyeongChang Winter Olympics in South Korea on Feb. 9. A lack of major mistakes in recent government management is also considered a positive factor.

The proportion of respondents who appreciate Abe’s attendance at the ceremony stood at 69.3%, far exceeding 19.8% who do not.

The survey was conducted over the four-day period of Feb. 9–12 through individual interviews. For the survey, a total of 2,000 people were sampled from among men and women, aged 18 and over, across the nation. The valid response rate was 61.9%.