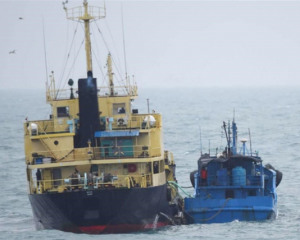 All papers reported on an MOFA announcement on Tuesday that an MSDF ship and patrol plane spotted an apparent illicit ship-to-ship transfer between a North Korean tanker and an unidentified small vessel off Shanghai in the East China Sea last Friday. The ministry has notified the UN Security Council of the incident in the belief that it constituted a violation of relevant sanctions resolutions. The small vessel bore on its hull Chinese characters indicating Ningde City in Fujian Province, China. The SDF has spotted similar incidents twice in the East China Sea previously.