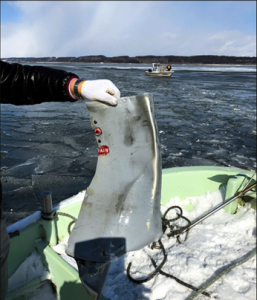 All papers reported that a USAF F-16 jettisoned two fuel tanks into a lake following an engine fire shortly after takeoff from Misawa AB on Tuesday morning. The papers quoted Col. Jobe, the commander of the 35th Fighter Wing, as saying in a released statement that the pilot dropped the external tanks over an unpopulated area. The commander reportedly promised to conduct a thorough investigation to determine the cause of the incident in response to a request from the Defense Ministry for the U.S. military to take measures to prevent a recurrence and ensure the safety of aircraft using the base. Col. Jobe visited the local municipal office to offer an apology for “causing concern” among local people.

The dailies highlighted the anger and concern voiced by local residents and officials. About 10 fishing boats were reportedly operating in the lake when the tanks were dumped and they landed only 200 meters away from one of the boats. Several fishermen witnessed a plume of water rising nearly 15 meters where the tanks struck the lake. As the fishermen later found an oil slick nearby, they reportedly decided not to resume fishing until the tanks were recovered and fuel was cleaned up.

According to the papers, Prime Minister Abe commented on the mishap by saying during a Diet committee meeting: “U.S. military operations must be premised upon ensuring the safety of local citizens. We plan to press the U.S. side to identify the cause, take preventive measures, and conduct thorough safety maintenance.” Chief Cabinet Secretary Suga also told the press that incidents like this must never happen. Nikkei said GOJ officials have become very nervous about local reactions to the recent series of mishaps involving U.S. military planes.

Asahi delved into the cause of the latest incident involving U.S. military aircraft based in Japan, with an ex-ASDF jet fighter pilot conjecturing that what he called “institutional stress” triggered by intense training in response to the situation in North Korea and China’s maritime advancement may be one of the root causes.