67% say Sagawa should be summoned to Diet, 58% opposed to expansion of coverage of discretionary work system, Asahi poll

The Asahi Shimbun nationwide (telephone) survey conducted on Feb. 17–18 asked respondents about the scandal surrounding the sale of state-owned land to school operator Moritomo Gakuen. Nobuhisa Sagawa, then director-general of the Finance Ministry’s Financial Bureau, said in the Diet in 2017 that the ministry had “discarded” all records related to the sale of the state-owned land in Osaka Prefecture to school operator Moritomo Gakuen. But this month the ministry released some documents related to negotiations over the land. Some 75% of pollees said the government’s handling of the matter is “unacceptable.” As for Sagawa, who has since been promoted to National Tax Agency chief, 67% of all respondents said he should be summoned to the Diet to explain his past comments about the documents.

Only 10% of respondents found the government’s handling of the matter “acceptable.” Even among supporters of the Abe cabinet, 64% said the government’s handling of the issue is “unacceptable,” easily surpassing the 20% who said it is “acceptable.” Some 58% of supporters of the cabinet and 86% of those who do not back the cabinet said Sagawa should be summoned to the Diet to explain his past comments about the documents.

Moritomo Gakuen had planned to build a private elementary school on the land that it bought. Akie Abe, wife of Prime Minister Shinzo Abe, had been named honorary principal of that school. [Opposition parties have suggested that the first lady’s connections to the school operator led to the ministry’s decision to sharply reduce the price of the land. Akie has denied playing any role in the negotiations.] Some 57% of respondents in the survey said she should explain herself in the Diet, compared with 33% who said her Diet testimony is unnecessary. The percentage of pollees who want the first lady summoned to the Diet increased from 53% in a survey conducted in April 2017, indicating that the public is still seeking answers. In the earlier survey, 39% of respondents said she does not need to provide Diet testimony.

A planned bill to address the problem of overwork in Japan would expand the “discretionary work system,” in which workers are paid based on predetermined working hours instead of the actual time put in. The ruling parties say the new system would “lead to more flexible ways of working.” However, the opposition camp says the plan would “end up making people work even longer hours.” According to the survey, 58% of voters oppose expanding the types of work covered by the discretionary work system, while 17% are in favor of the change.

[Polling methodology: The survey was conducted on Feb. 17–18 on a computer-aided random digit dialing (RDD) basis of voters nationwide with telephone calls placed by pollsters to landline and mobile phone numbers (for landlines, some districts in Fukushima Prefecture were excluded). Valid responses were received from 795 persons (out of 1,703 households found to have one or more eligible voters) for landline numbers and from 1,002 persons (out of the 1,951 persons found to be eligible voters) for mobile numbers. The valid response rates were 47% for landline numbers and 51% for mobile numbers.] 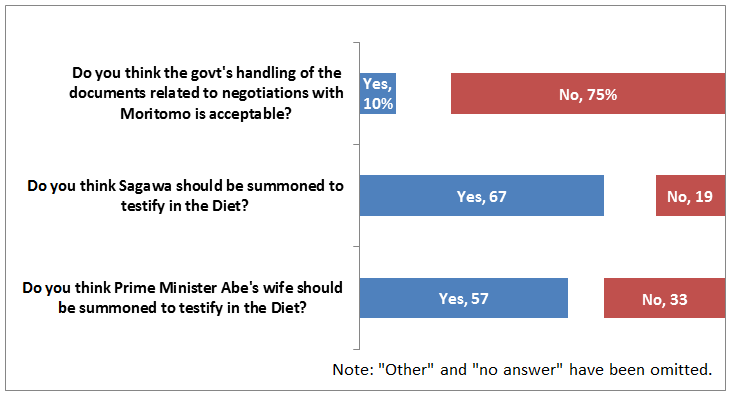