Japan’s ability to abide by international restrictions on bluefin tuna fishing is in doubt. It appears that for the second year in a row, Japan will exceed its quota on small bluefin tuna caught in the Pacific Ocean.

The Fisheries Agency is calling for fishers to exercise self-restraint and trying other means to address the situation, but it will probably be unable to avoid international criticism.

In late January, the agency urged coastal fishers nationwide to refrain from catching small bluefin tuna weighing less than 30 kilograms until June. This is because Japan is approaching its quota of 3,424 tons for the current fishing season, which runs from July 2017 to June 2018.

With more than four months remaining in the season, 3,341 tons had been caught as of Feb. 14, which is 98 percent of the quota.

A senior agency official expressed a mounting sense of urgency, saying, “If things continue on like this, [Japan’s] fishing quota could be reduced.”

During the previous season — from July 2016 to June 2017 — Japan exceeded its quota of 4,007 tons by more than 300 tons, which was then subtracted from the quota for the current season.

Therefore, Japan, the world’s largest catcher and consumer of bluefin tuna, led an effort to introduce international catch limits, which were imposed on immature small tuna in 2015 and on adult fish in 2017.

An international organization Japan is part of decided fishing quotas for each country, and the Japanese government then allocates its national quota among the prefectures.

Japan’s quota for both adult and small fish is about 60 percent of the total.

The main reason why the quota is about to be exceeded is an unexpectedly big haul in some areas.

Fixed-net fishing for salmon and buri Japanese amberjack in Hokkaido and elsewhere has also brought in large numbers of small bluefin tuna.

A person associated with the co-op said: “We didn’t expect to catch bluefin tuna during that period. Fixed-net fishing doesn’t discriminate between fish.”

In Iwate Prefecture, 101 tons of bluefin tuna were caught during a week of fixed-net fishing for salmon, which is more than 30 tons over the prefecture’s annual quota of 67 tons.

Unapproved catches and other violations are rampant. Japan has many small-scale operators that fish from small boats, which are difficult for the agency to monitor and direct.

Bluefin tuna, known in Japanese as kuromaguro or hon-maguro, is a prized fish that is used in sashimi and sushi in Japan. The bluefin tuna caught in the Pacific Ocean accounts for 60 percent of bluefin tuna on the market in Japan.

Fishing for small bluefin tuna is essentially banned in the Atlantic Ocean and the Mediterranean Sea. Early implementation of this and other restrictions has led to a rapid recovery in bluefin tuna stocks in these areas.

Yet in the Pacific Ocean, if Japan breaks international promises for the second year in a row, it is sure to face heightened criticism from overseas.

In the past, Japan has often been subject to criticism for overfishing and weak resource management.

The agency intends to introduce new rules in July this year that entail fines or imprisonment if violated in order to strengthen its crackdown.

Yet because the agency’s call for restraint is not legally binding, the quota is expected to be exceeded as early as March.

“If we don’t abide by fishing quotas, trust in Japan will decline and our voice won’t carry as much force at international meetings and elsewhere,” a senior agency official said.

Eiji Tanaka, a professor at the Tokyo University of Marine Science and Technology, said: “The international perspective is that Japan’s resource management is insufficient. It’s important to create a flexible framework, such as by allowing each prefecture to adjust their quotas for each other’s benefit.” 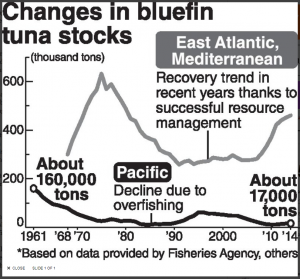