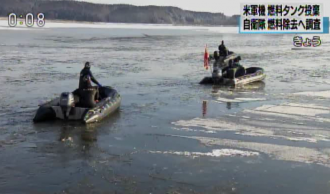 All networks reported at noon that  MSDF personnel have begun a survey of Lake Ogawara where two fuel tanks were jettisoned by a U.S. fighter on Tuesday. According to the network, the MSDF discovered no oil slicks or parts of the tanks this morning, but reported that they smelled oil in four locations. The network said the MSDF will continue the survey this afternoon and retrieve the tanks if they find them.