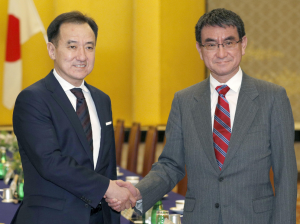 All national dailies reported on Foreign Minister Kono’s meeting with his visiting Mongolian counterpart Tsogtbaatar in Tokyo on Thursday, during which they discussed North Korea. Tsogtbaatar held talks with Kim Yong Nam, the president of the Presidium of the Supreme People’s Assembly of North Korea, and North Korean Foreign Minister Ri Yong Ho in Pyongyang earlier this month. Mainichi, Yomiuri, and Nikkei wrote that Kono asked for Mongolia’s assistance in resolving the abduction issue and that the two officials agreed on the need to fully implement the UNSC’s sanctions resolutions. Asahi and Sankei quoted Kono as telling Tsogtbaatar at the outset of the meeting that it is important to increase the pressure on the DPRK to the maximum extent in every way possible and that Japan is hoping for continued cooperation with Mongolia.