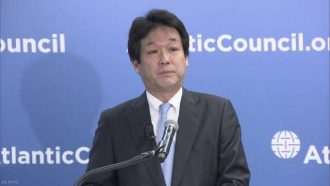 NHK reported that Prime Minister Abe’s aide Sonoura delivered a speech in Washington on Thursday, during which he pointed out that it is important not to be blinded by North Korea’s charm offensive and stressed the need to maximize pressure.  He also reportedly stressed that nations should use every possible means to maximize pressure on North Korea, as confirmed by PM Abe and President Trump.

Concerning the TPP, Sonoura reportedly expressed hope for the U.S. to return to the agreement. In addition, Sonoura called for U.S. cooperation in implementing the “free and open Indo-Pacific strategy,” proposed by PM Abe. On China, he said: “If it grows its economy by adhering to openness and transparency, it would be a plus for the world and I would welcome it.” He also kept China’s maritime advancement in check by saying: “We must say no to any attempt to change the status quo by force.”