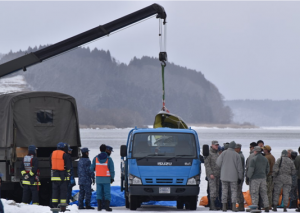 All national papers reported either in their Saturday evening or Sunday editions that MSDF personnel on Saturday recovered a large number of fragments of the fuel tanks that were jettisoned by a Misawa-based F-16 into a local lake near the installation. The retrieved items were handed over to the U.S. military based on the SOFA. Today’s Sankei wrote that according to the U.S. military, the MSDF has retrieved some 75% of the fragments of the fuel tanks.

In a related development, Defense Minister Onodera reportedly met with Aomori Governor Mimura and other local officials on Saturday to discuss the incident. Onodera explained that the ministry will “respond in good faith” to a request filed by the local officials for financial compensation for the fishermen who were forced to suspend their operations at the lake after the tanks were dropped there last week.

According to Mainichi, Onodera told the press afterward that the U.S. military has informed his ministry that the mechanical problem that resulted in the dropping of the tanks was unique to the aircraft in question and is not common to other F-16s. The daily separately reported on Saturday that unspecified Misawa base officials met with local fishermen on Friday and apologized for “causing great inconvenience.”