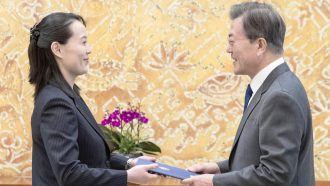 NHK’s “Close-up Gendai +” reported on the growing conciliatory mood between North Korea and South Korea and the “smile diplomacy” of the North Korean leader’s sister Kim Yo Jong. The program focused on the intense diplomatic moves made on the sidelines of the PyeongChang Olympics opening ceremony.

The program said the U.S. and Japan are alarmed by the recent conciliatory mood between the two Koreas, adding that while President Trump and Prime Minister Abe confirmed the need to increase pressure on the North during their phone conversation on Feb. 2, the two nations have also sought ways to convey their intentions to the North Korean leadership. According to the program, Vice President Pence told PM Abe when they met two days before the Olympics opening ceremony that the U.S. was planning to agree to hold talks with North Korea. The Japanese side was also planning to convey its position to the North Korean side if there was a chance to do so.

The program said while Vice President Pence only attended the reception before the opening ceremony for five minutes, PM Abe spoke briefly with Kim Yong Nam, President of the Presidium of the Supreme People’s Assembly of North Korea, during the reception. The program said the premier told Kim that all abductees should be returned home, and that North Korea must resolve the nuclear, missile, and abduction issues. Kim reportedly expressed interest in holding dialogue with Japan. The program said although there was no U.S.-DPRK meeting in PyeongChang, the North Korean side conveyed to ROK leader Moon that it is ready for talks with the U.S.

Nanzan University Professor Hiraiwa said North Korea’s recent overtures are not necessarily the result of the intensified international sanctions, adding that the North is hoping as a nuclear power to hold talks with the U.S. to have the sanctions relaxed in order to develop its economy. An NHK reporter said that although the leaders of the U.S. and Japan believe that denuclearization should be a precondition for dialogue, ROK leader Moon thinks that dialogue should be a result, adding that the gap between South Korea and the U.S. and Japan remains wide. Hiraiwa also said the relationship between the U.S. and South Korea, including whether they will resume the joint military drills, holds the key to the future of the Korean Peninsula.