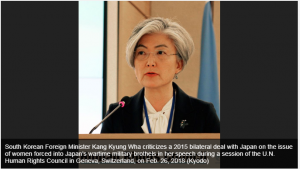 Kang Kyung Wha said the South Korean government “will take steps to help heal the scars (of the victims) and restore their dignity and honor.” She did not provide further details.

The South Korean minister made the statement on the “comfort women” issue during the U.N. Human Rights Council’s high-level segment, which marks the opening of a four-week session of the Geneva-based body.

The statement came as Seoul has recently reignited tensions with Tokyo by requesting that the Japanese government take additional measures for former comfort women despite the bilateral agreement to “finally and irreversibly” resolve the issue.

In the latest illustration of tensions, the Japanese Foreign Ministry last week criticized the use by a South Korean minister of the term “sex slaves” at the U.N. Committee on the Elimination of Discrimination against Women in Geneva, saying the two countries confirmed in the 2015 accord that the term should be avoided.

Regarding North Korea, Kang emphasized the need to “ensure that the spirit of Pyeongchang (Olympics) live long after the games, so that peace can take strong roots on the Korean Peninsula and the dire human rights situation in the North can be improved.”

Relations between the two Koreas have shown signs of improving after Pyongyang decided to join the Pyeongchang Olympics. South Korean President Moon Jae In on Monday called on the United States to ease its conditions for dialogue with North Korea, a day after Pyongyang expressed readiness to hold talks with Washington.

Amid concerns that the North Korean charm offensive is weakening Seoul’s commitment to international sanctions, Kang said South Korea “will continue to join the international community in urging North Korea to change course both on the security and human rights fronts.”

She also called for the urgent resumption of reunions of families separated by the 1950-53 Korean War and the “immediate release of South Korean nationals as well as other citizens detained in the North.”