In the telephone-based public opinion poll jointly conducted by Nikkei Inc. and TV Tokyo on Feb. 23–25, the cabinet support rate was 56%, essentially the same as the 55% found in the previous poll taken in late January. Some 72% of pollees said they are in favor of the Liberal Democratic Party (LDP) proposal to revise the Constitution to create provisions that obligate the state “to endeavor to enhance the educational environment.” The survey reveals that, of the four constitutional amendment proposals the LDP is prioritizing, improving education is the one most likely to gain public approval.

Regarding constitutional amendment, the LDP Headquarters for the Promotion of Revision to the Constitution (chaired by Hiroyuki Hosoda) plans to compile revision proposals in time for the Party Convention on March 25. The party is placing priority on the following four issues: (1) revision of Article 9, (2) addition of a state-of-emergency clause, (3) eliminating “combined constituencies” in Upper House elections, and (4) enhancing education. The party already has an estimate of how and when the proposals regarding the combined constituencies and the enhancement of education will be completed.

The draft provisions to designate the enhancement of education [an obligation of the state] attracted support from a broad range of political party supporters, with 80% of LDP supporters and 60% of Constitutional Democratic Party of Japan (CDPJ) supporters and independents saying they support it.

In contrast, pollees were split on altering Article 9 of the Constitution to explicitly state the existence of the Self-Defense Forces (SDF). About 47% said they are in favor of adding a provision to make the existence of the SDF explicit without changing the current provisions of the article, exceeding the 33% who said they are opposed. There was a dramatic difference in support depending on the political party the pollee backed. Some 67% of LDP supporters said they are in favor of revising Article 9 while 17% said they are opposed. The exact opposite results were found for CDPJ supporters, with 22% in favor and 68% opposed.

Independents were split, with about 30% in favor and 30% opposed. Another 30% did not give a clear opinion and responded either “can’t say either way” or “don’t know.” There is a chance that there is insufficient understanding among the public regarding the implications of clearly stating the existence of the SDF.

Some 59% said they are in favor of the idea of revising the Constitution to eliminate “combined constituencies” in Upper House elections, while 25% said they are opposed. Under the combined constituencies scheme, one representative is elected for two neighboring prefectures in certain underpopulated areas. Some 66% said they are in favor of allowing the terms of Diet members to be extended in the event that an election cannot be held due to a major disaster, while 21% were opposed.

The approval rating among LDP supporters for both the elimination of “combined constituencies” and the lengthening of Diet members’ terms in case of emergency was 70%, whereas CDPJ supporters were split on both issues. The majority of independents were in favor of both proposals, but about 20% did not indicate whether they were in favor or opposed.

A top LDP official said in regard to the poll findings, “We should not let our guard down. We must continue to explain issues to the public.” Komeito Acting Secretary-General Tetsuo Saito expressed the intent to carefully further the debate, saying, “We need to have the agreement of a broad range of the people, including those supporting opposition parties.”

CDPJ Diet Affairs Committee Chairman Kiyomi Tsujimoto indicated he is prepared to oppose the LDP’s four items, saying, “There may be a lot of people in favor now, but I think people will gradually become more cautious. Education can be made free of charge by creating a law.” Party of Hope leader Yuichiro Tamaki said, “There may be few people who would express opposition if asked if they are in favor of enhancing education, but the concrete details of the proposal have yet to be debated.”

The survey was conducted on Feb. 23–25 by Nikkei Research Inc. via random-digit dialing (RDD) to both landlines and mobile phones. It drew 972 responses from men and women aged 18 and older nationwide, for a response rate of 45.7%. 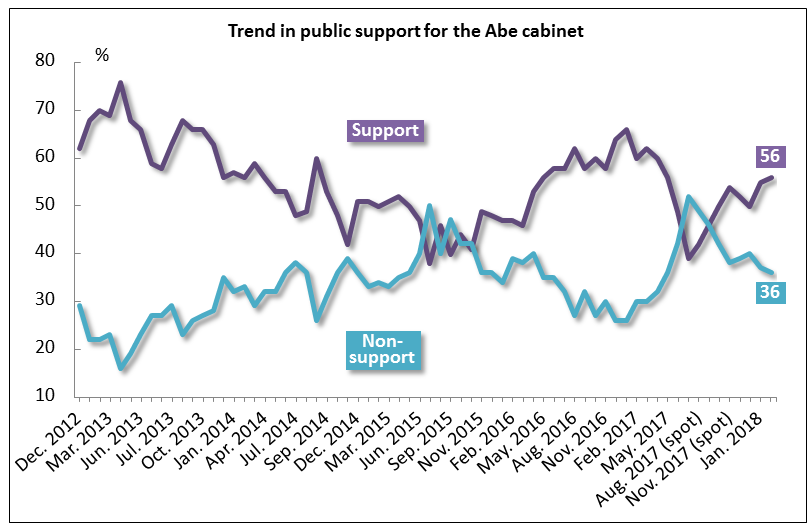 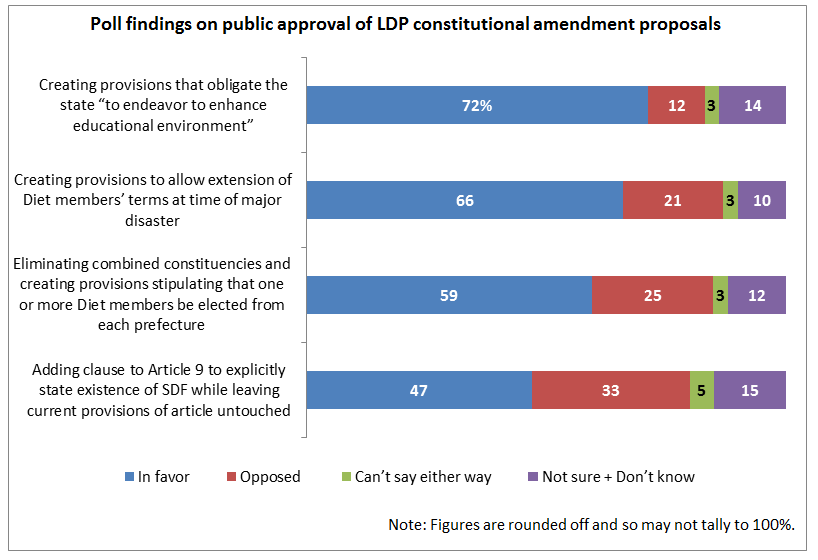