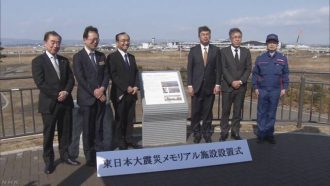 NHK reported that a ceremony was held today to erect a monument to commemorate Operation Tomodachi following the Great East Japan Earthquake seven years ago. The monument was reportedly erected in Ainokama Park near Sendai International Airport, which the U.S. Air Force and Marines helped reconstruct together with the SDF after it was severely damaged by the tsunami. The troops used the airport to deliver relief goods to disaster-hit regions. The network said the monument is intended to help share with future generations the lessons learned by those involved in the disaster relief operations.