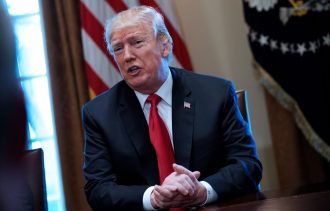 NHK reported this morning that President Trump announced on Thursday that he will formally decide as early as next week to impose tariffs of 25% on steel and 10% on aluminum based on Section 232 of the Trade Expansion Act, invoking his presidential authority on the grounds that China’s steel products have become a security threat to the U.S.  The President reportedly said the tariffs will be in effect “for a long period of time.” An NHK reporter opined that if a nation is allowed to invoke import restrictions for security reasons, it could provoke other nations to follow suit, adding that this could pose the risk of paralyzing the global economy.