AOMORI, Japan — Japan’s Maritime Self-Defense Force on Wednesday completed the recovery and cleanup of leaked oil and debris from fuel tanks jettisoned into a northeastern Japan lake by a U.S. fighter jet in February.

The work was drawing to a close the same day that Aomori Gov. Shingo Mimura requested the MSDF withdraw its personnel, saying large tank parts that could damage fishing equipment are likely to already have been collected. 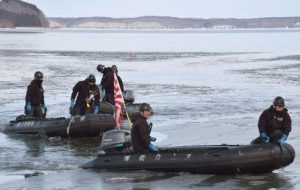 But the governor asked the U.S. forces to continue cleanup work, saying in a faxed request to Col. R. Scott Jobe, commander of U.S. Misawa Air Base, that “fuel oil and broken (tank) pieces are still believed to be there.”

On Feb. 20, an F-16 fighter developed an engine fire immediately after taking off from the Misawa base and dropped its two external fuel tanks into Lake Ogawara near the Aomori town of Tohoku.

The fighter jet returned safely to the base, but the dumped tanks left oil slicks in the lake, sparking safety concerns among locals as well as worries about potential disruptions to fishing operations.

MSDF personnel collected a total of 87 parts and fragments of the fuel tanks by Tuesday. The U.S. military said that 94 percent of the fragments had been retrieved from the lake as of late February.