Cabinet support rate drops to 48% as it is discovered that politicians’ names were erased, Yomiuri poll

On March 11, a Finance Ministry investigation revealed that the names of several politicians, including some former government ministers, were erased from documents related to the sale of state-owned land to school operator Moritomo Gakuen. At the request of the ministry’s headquarters, 14 of the original documents were altered. On March 12, the Finance Ministry plans to report these facts and the other findings of the investigation to the ruling parties and the Diet and to admit to altering the documents. According to the Yomiuri Shimbun’s nationwide public opinion poll conducted on March 9–11, the cabinet support rate dropped to 48%, down 6 percentage points from the previous survey (conducted on Feb. 10–11). The nonsupport rate rose to 42% (36%).

At the request of the Diet, the Finance Ministry is conducting an investigation into the 2015 land-lease contract and the 2016 sales contract documents, which were prepared by the Kinki Local Finance Bureau. So far, the investigation has found that several documents exist in addition to the documents disclosed to some Diet members and others last year. Part of the history of the negotiations and the names of several politicians, including former ministers, have been erased from the disclosed documents.

Deletions also include segments that could be seen as contradicting parliamentary statements made by former National Tax Agency Commissioner Nobuhisa Sagawa when he was director-general of the ministry’s Financial Bureau. The Finance Ministry plans to report the results of its investigation to the Liberal Democratic Party and the Komeito as well as to a meeting of the members of the Upper House Budget Committee and the Lower House Committee on Financial Affairs. The ministry is considering punishing the staff members and officials involved in drawing up the documents in question.

This was the first time for the cabinet support rate to fall below 50% in a Yomiuri nationwide poll since the Lower House election last October. Some 80% of pollees said that they do not think the government is properly handling the allegations that the Finance Ministry altered documents related to the sale of state-owned land to Moritomo Gakuen. Even among cabinet supporters and LDP backers, 65% said the matter was not being handled properly. Some 71% of respondents said that the Diet should summon Nobuhisa Sagawa to give an explanation regarding the Moritomo Gakuen issue, greatly exceeding the 20% who said that was not necessary. In response to Diet interpellations, Sagawa earlier said that all documents at the Finance Ministry concerning the sale of state-owned land to Moritomo Gakuen had been “discarded.”

[Polling methodology: The nationwide survey was conducted on March 9–11 on a computer-aided random digit dialing (RDD) basis and targeted voters aged 18 or over with calls placed to landline and mobile phone numbers. Valid responses were received from a total of 1,036 persons, including 505 persons (out of the 856 households with one or more eligible voters) for landline numbers and 531 persons (out of the 1,141 persons who answered) for mobile numbers. The valid response rates were 59% for landline numbers and 47% for mobile numbers.] 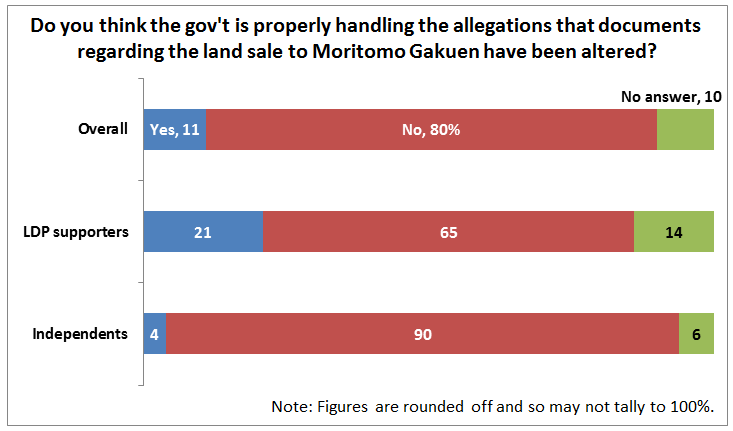