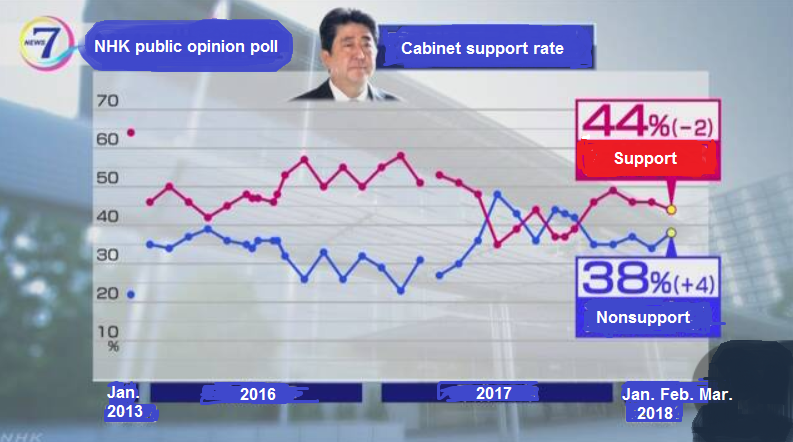 The [nationwide] survey was conducted by NHK from March 9 over three days on a computer-aided random digit dialing (RDD) basis and targeted men and women aged 18 or over with calls placed to landline and mobile phone numbers. Valid responses were received from a total of 1,208 persons out of the 2,100 people polled. The valid response rate was 58%.

National Tax Agency Commissioner Nobuhisa Sagawa has resigned. Sagawa was director-general of the Finance Ministry’s Financial Bureau [at the time of the sale of state-owned land to Moritomo Gakuen] and responded to Diet interpellations regarding the land sale. Asked what they think about the resignation, 42% said “it is a matter of course,” 17% said “it was not necessary,” and 30% said they “can’t say either way.”

In his consultations with South Korea, Workers’ Party of Korea Chairman Kim Jong Un indicated the willingness to denuclearize and to exercise self-restraint in conducting nuclear weapons tests and launching ballistic missiles. Asked if they think Kim Jong Un’s statement can be trusted, 3% of respondents said “yes,” 71% said “no,” and 22% said they “can’t say either way.”

Regarding the work-style reform bill, Prime Minister Abe has instructed that the expansion of the types of work subject to the discretionary work system to be removed from the bill. Asked what they thought about this, 27% of respondents said “it is a matter of course,” 12% said “it was not necessary,” and 49% said they “can’t say either way.”