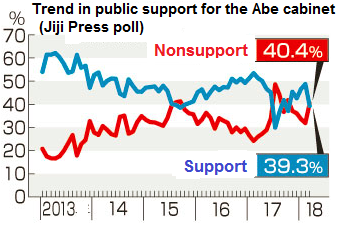 According to the March Jiji Press opinion poll conducted on March 9–12, public support for the cabinet of Japanese Prime Minister Shinzo Abe dropped by 9.4 percentage points from February to reach 39.3% this month, while the disapproval rate rose 8.5 points to 40.4%. This is the first time in five months since October last year for the support rate to be in the 30% range and for the nonsupport rating to exceed the support rating. It looks like the scandal related to the Finance Ministry’s altering of documents related to the sale of state-owned land to school operator Moritomo Gakuen has dealt a blow to the administration.

The opposition parties are ramping up their attack in protest against the document tampering and are pressing for the resignation of Deputy Prime Minister and Finance Minister Taro Aso. The administration will be forced into a defensive position for the immediate future. It will inevitably impact the Diet debate on constitutional amendment, which Prime Minister Shinzo Aso is promoting, and his strategy for election to a third term as Liberal Democratic Party president in the party election this autumn.

Dramatic rise in those who find Abe untrustworthy

Some 66.3% thought that former National Tax Agency Commissioner Nobuhisa Sagawa, who was director-general of the Financial Bureau at the time of Finance Ministry’s alteration of the documents, should be summoned to the Diet to give an explanation, easily exceeding the 21.7% who thought that is not necessary.

[The survey was conducted on March 9–12 through individual interviews. For the survey, a total of 2,000 people were sampled from among men and women, aged 18 and over, across the nation. The valid response rate was 61.4%.]