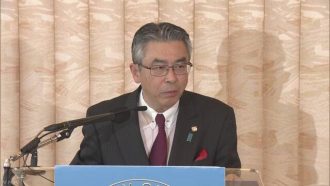 NHK reported on its website that Japan’s new Ambassador to the U.S., Shinsuke Sugiyama, held a press conference in Washington on Wednesday during which he said Japan “is with great interest collecting and analyzing information” on the recent summit between North Korean leader Kim Jong Un and Chinese President Xi. “North Korea’s call for dialogue is the result of the maximum pressure campaign by the U.S. and Japan, as well as the U.S., Japan, and South Korea,” he said. Meanwhile, Sugiyama also stressed the need to realize complete, verifiable, and irreversible denuclearization by saying: “This is just the beginning. Holding dialogue for the sake of dialogue is meaningless.”